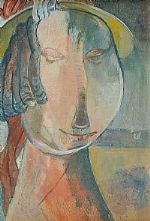 Mary Swanzy (1882-1978) was a landscape and genre artist, known for being one of Ireland’s first abstract painters. Born in Dublin into an affluent family, she received extensive private art tuition before attending May Manning’s art classes where she was instructed by John Butler Yeats. Her education continued and included evening classes at the Dublin Metropolitan School of Art, tuition at the Royal Hibernian Academy and time spend studying at L’Académie de la Grande Chaumière. It was during her time spent in France that her fondness for abstract art was developed and she found influence in artists such as Picasso, Braque, Gauguin, Derain and lifelong friend Sarah Purser. Unlike fellow Irish cubists Evie Hone and Mainie Jellett, she was not concerned with traditional Irish art or themes, opting to foster her own distinctive style. The death of Mary’s parents left her with the financial stability to both travel widely and to explore her artistic freedom, not having to adjust her style in order to suit buyers. This allowed her to experiment with various artistic ideals including Cubism, Fauvism and Orphism.
Holding her first solo show at Mill’s Hall in Dublin, she would exhibit work with the Dublin Painters’ Gallery, St George’s Gallery in London, the Dawson Gallery and at the Irish Exhibition of Living Art. She exhibited regularly with the Royal Hibernian Academy, of which she was made an honorary member (1949), and with the Société des Artistes Indépendants, of which she was elected a committee member (1920). A major retrospective was held of her work by the Hugh Lane Gallery (1968), the Taylor Galleries held an exhibition marking the centenary of her birth (1982) and she was featured in the Irish Museum of Modern Art’s exhibition analysing Cubism (2013).